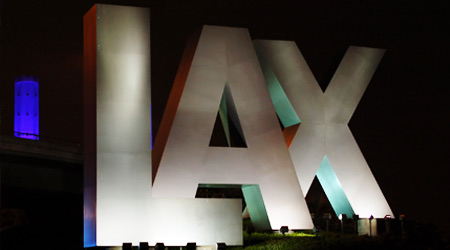 Los Angeles International Airport (LAX) is the largest and busiest airport in the Greater Los Angeles Area and the state of California, next to the Pacific Ocean. It is located between the neighborhood of Westchester to its immediate north and the city of El Segundo. It is an OC Private Car Service destination.

Los Angeles International Airport is the largest and busiest airport in the Greater Los Angeles Area and the state of California, and it is one of the most important international airports in the United States. It is most often referred to by its IATA airport code LAX, and it is located in the southwestern Los Angeles area along the Pacific Ocean between the neighborhood of Westchester to its immediate north and the city of El Segundo to its immediate south

Over 74,900,000 passengers, go through this tourist mecca per year, making it the seventh busiest airport by passenger traffic in the world. The airport is known as “the world’s busiest origin and destination (O & D) airport.” Furthermore, it is also the only airport to rank among the top five U.S. airports for both passenger and cargo traffic.

LAX serves is the hub for American Airlines, Delta Air Lines, United Airlines, Alaska Airlines, and Virgin America. And as the largest international airport on the West Coast of the United Sates, LAX is a major gateway to and from Europe, Latin America, Asia and Oceania. Connection to Asia and Latin America are made from this port as well.

Other airports, including Bob Hope Airport, John Wayne Airport, Long Beach Airport, and LA/Ontario International Airport, also serve the region. It is also notable for being one of the few U.S. airports with four parallel runways.

Our business is based on referrals and customers that come back to us on a continuous bases.  That is because we serve our community and live and work here. OC Private Car Service strives on providing courteous, quality service, punctually and on time.

Your trip to the airport will be quoted with no hidden fees including taxes.

LAX Airport Transportation tips:
Flying out of LAX: Make sure to give yourself ample time to get to the airport. Reserving a car service gives you the piece of mind that we will be there waiting for you well before your scheduled trip to the airport.

Flying into LAX:  Reserve your car service and avoid the long Taxi lines, disgruntled drivers or asking family members to put up with LA traffic, inconvenience and cost.   A driver will meet you at point of designation and help you with your luggage and get you on your way.

Whether you are traveling to the airport for a flight out or coming into LAX, you can reserve a Towncar online or by calling us toll free at 888-400-1919.